Monkfish in Armoricaine (or American) Sauce is a classic from French cuisine. The monkfish (known as the “poor man’s lobster”) is flamed with cognac and simmered in a tomato sauce with white wine, shallots, garlic, and herbs.

In some recipes, a fresh fumet (made from bonefish, head, or shell), fish stock, or lobster bisque can be added to the dish with a final touch of butter or cream.

Armoricaine Sauce (a derived name from Côtes d’Armor, the North of Brittany, France) also is known as American Sauce and served with lobster or firm white fish.

But why do we also call this American Sauce? 🧐

For the little story, the origin of the term “American” comes from Pierre Fraysse (nicknamed Peters), a French cook of Sète (South East of France).

One evening, shortly before closing, guests arrived and insisted on dinner. Peters, therefore, went back to his stove, but he didn’t have the time and the ingredients. So he decided to cut the lobsters into pieces so that they would cook more quickly. He added these to a sauce made of tomatoes, garlic, shallots, white wine, and cognac. The meal was a real success and when asked the name of his recipe he called it “American lobster”, influenced by his trip across the Atlantic.

The name “American” applied to lobster is often controversial. Many hold “Armorican” as the only valid name, especially due to the fact that Brittany is a big producer of this crustacean.

But if we look more closely at the composition of the sauce (tomato, garlic, and olive oil), it resembles a dish more from southeastern France than from Brittany.

What to serve with this dish?

Steamed vegetables or rice pairs well with my Monkfish in Armoricaine (or American) Sauce. 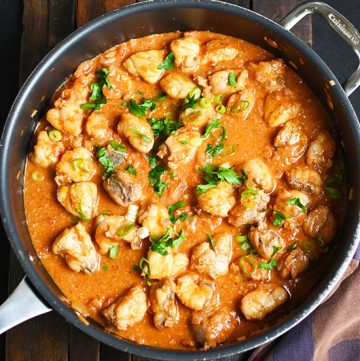 Monkfish in Armoricaine (or American) Sauce