Being in the Fall season gave me the desire to make this French Southwestern Apple Croustade that my mother-in-law showed me how to make when she came to visit us in Atlanta.

Croustade is a popular dessert in Southwestern France. Depending on the area, the recipe and the name (called Croustade, Pastis Gascon, or Tourtière) vary. Sometimes, it is made with a homemade puff pastry, pâte brisée, or stretched dough (similar to phyllo dough). The croustade generally has a round shape and is filled with apples marinated in Armagnac alcohol.

The French Southwestern Apple Croustade recipe that I am giving you is very local since it is a family recipe. The dough uses basic ingredients such as eggs, butter, milk, and sugar. Then, it is stretched very finely into a rectangle. The apples marinate in rum, with sugar, and are then drained. Halfway through the cooking, we brush the dough with the drained apple juice. This gives a nice flavor and a caramelized color to the dough. 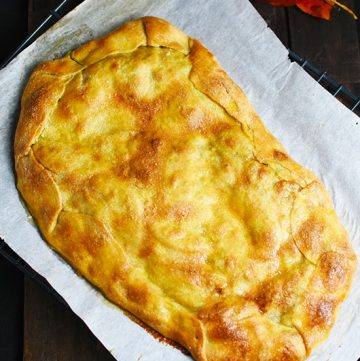 To make the dough:

To make the dough:

(*) In the original recipe, my mother in law did not give me a specific quantity for the flour. She just told me that you need to add roughly some flour until the dough is smooth and not too sticky. I will advise you to put about 200 g of flour in a bowl and add gradually the flour during the kneading by hand until the dough is smooth and not too sticky. In my case, I did not use at the end all the quantity of flour that I put in the bowl only 180 g. Feel free to add a little more if needed.
Keyword fall, Southwestern,
Tried this recipe?Let us know how it was!