Rhubarb on a thin layer of apple with light pastry cream is the perfect combo of tartness and sweetness in this French Rhubarb Apple Tart! A simple family recipe that you will surely enjoy.

This year, I was so happy to find fresh rhubarb at my Whole Foods Market twice in a row. I really love the tangy taste of this vegetable often used in desserts. It always reminds me of the times in my childhood where rhubarb was in season when we would harvest some in my grandparents’ garden.

Previously I made these recipes Rhubarb Pie and Rhubarb Meringue Pie. However, I wanted to rediscover the flavor of my childhood and asked my parents for their recipe. So this is the French Rhubarb Apple Tart, a family recipe.

In their recipe, instead of macerating rhubarb with sugar for at least one hour, they blanch it for 2 minutes and let it drain well in a colander. They also put a thin layer of apple on the bottom of the tart so the apple soaks some of the rhubarb’s juice, and softens its acidity by releasing some natural sugars. They use a simple mix of egg, sugar, pastry cream mix (that you can easily make yourself without additives), a pinch of cinnamon, and milk.

My teens told me that this French Rhubarb Apple Pie was the one that they preferred from all of the recipes I made. I agree with them. The tart is light, and not too sugary. We also enjoyed the addition of the apple which pairs so well with the rhubarb. When eating a slice of this tart, you can always sprinkle more sugar if you want to. 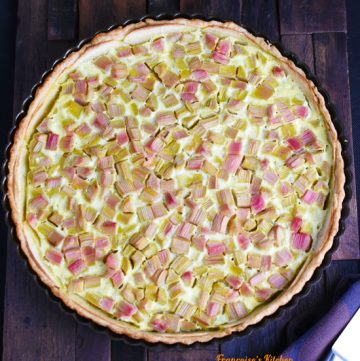 For the pastry cream:

To make the pastry cream :